Request a Call Back

In this world, there are 7 seas, 7 weekdays, 7 stars (Indian- Saptrishi), 7 principal colours, 7 parts of the earth, 7 mountains, 7 metals, 7 sounds, 7 wonders and Seven wends within. No vibration is more inwardly directed than the Seven. In various Numerology texts, there is a detailed description of its spiritual values. While ‘one’ may be the most solo number in a worldly sense, Seven is the most removed from the world. in today’s special post, we are exploring the attributes and qualities of numerology number 7.

The Great Father of mathematics and numerology, Pythagoras considered Seven as a highly spiritual number. It is shaped like a shepherd’s crook, the number 7 symbolically represents the flow of the kundalini from the bottom of the spine to the third eye in the centre of the forehead between the eyes. The third eye is known in mystical circles as Tisra Til or the Tenth Gate. It is the secret doorway leading to the inner worlds. 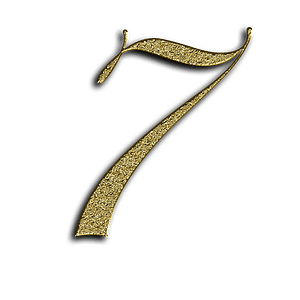 People born on 7, 16, 25 of any month or if the sum total of their Date of Birth reduces to 7 are number 7 people. Seven is deep, introspective, intuitive, private, reclusive, secret, separate, distant, and indifferent to the outer world of phenomena but not to the inner worlds of secrecy, intrigue, hidden mysteries. Seven is highly analytical, inquisitive, perfection-seeking, often critical. It asks why and travels within to find out. Those who desire to know the inner secrets of life, the cosmos and the universe have seven highly active in their vibration matrix.

The Seven vibrations in its spiritual frequency are sensitive, refined, reserved, stately, quiet, humble, calm, tranquil, serene, pure, and chaste. The way to spiritual insight is through the Seven for it is patient, mystical, wise and, ultimately, self-realized. Seven turns away from the outer world of phenomena and commercialism and, through meditation and prayer, directs itself to the inner regions of mystical light to find Him–often painfully but never regretfully.

The number 7 symbolizes humanity’s deep inner need to find depth, meaning, and spiritual connection. When the creature needs food, self-expression, material and domestic achievements have been met, we turn to the deeper levels of life — to learn, to educate ourselves and to find purpose. The 7 is an investigator, an inventor, and must have solitude in which to find the inner voice. Sevens tend to be different, eccentric, or loners and are very discriminating in all areas.

Number 7 is ruled by Ketu.

In Vedic Numerology, number 7 relates to the south node of moonie. Ketu. It is generally referred to as a “shadow” planet. Ketu is considered malefic and has been mostly associated with negative things. Most people consider it a difficult planet as it brings a lot of troubles on the material plane. It often brings a sense of detachment, losses, mindlessness, wandering, and confusion in one’s life.

Being the south node of the moon (Number 2) the nature of number 7 is opposite to the qualities of no.2. He tends to render the nature sensuous and dreamy, when prominent or active. When they are passive, it gives a decided tendency to fraud. Undoubtedly he acts as a malefic upon the majority. He likes to be in his own dream world. Sometimes attached sometimes scattered are the 2 extremes of this number. It is very difficult to understand these people as they have hidden secrets. They are well versed in reading the minds of others. They have a keen interest in religious activities. They are lovers of solitude and love to hear words of their appreciation.

When it comes to love relations these people are very serious about their partners and their relationships. Ladies of this number do not make a show-off of their love, but in the hearts, they have real love. Some of them do not marry at all and lead an unmarried life because of their oversensitive nature. When they do get married, it is generally observed that they get rich families as their in-laws. The people of this number have great love and affection for the children they have and less for the children around them. They are usually very successful in their marriage and family front.

These people generally don’t make a lot of friends but the ones who already are, they are the best for them. They are usually introvert and get along with people who are intellectual or those who can handle difficult situations for them and with them. They do not like accumulating money or this can also be said that they are not able to save. They like frequent travels so they spend most of their lives in travelling especially to foreign countries.

It has also been observed that these people pick up only those professions which can give them chances to fly or located in foreign countries. Their main characteristic is their capability of taking independent decisions. They do not work under some undue pressures and nobody else can dictate them. Whatever they do have a tinge of novelty. They are generous people and certainly enjoy a happy & prosperous life. Number 7 people have no luck on their side. Success and luck elude them. They seldom enjoy success and even if they do it will be after a lot of hard work struggle and disappointments. They are always struggling to get some recognition or success. They face a lot of failure and dejection. Many number 7’s do unfulfilling jobs and don’t get to the level where their career should take them in spite of their willpower intelligence and acumen.

Professions which suite they are teacher, philosopher, actor or anything that is not refined with superiority. Diseases which affect them are related to ‘Adrenal’ gland. Generally, they have a problem with digestion, kidney, circulation of blood, ovary, Fallopian tube, uterus. These diseases arise from mental trauma or hypertension which blocks their solar plexus. They have the ability to keep thinking but this sometimes goes beyond what it should and that is why these diseases come into the picture. If they are able to control their mind then they can surely come out of their diseases.

A name correction for a number 7 is a complex process as its a malefic planet.

The Remedies for Number 7’s are

Request a Call Back